Four states and four counties have begun preparations to commemorate the 2009 sesquicentennial anniversary of abolitionist John Brown’s raid on the arsenal at Harpers Ferry. The John Brown 150th Anniversary Quad-State Committee, comprised of various historians and officials from West Virginia, Pennsylvania, Virginia and Maryland, are planning and coordinating a range of commemoration events.

Officials responsible for organizing the commemorations say that events will include re-enactments, dramatic productions, art exhibits, academic lectures, special tours and much more. 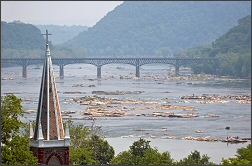 On the evening of Oct. 16, 1859, Brown led a group of abolitionists on a six-mile march from the Kennedy Farm in Washington County, Md., across the railroad bridge into Harpers Ferry and seized control of the town in order to steal weapons from the old federal armory so they could be used in the cause against slavery. But because a passing train reached Frederick, Md., a telegram notifying the army of the attack enabled soldiers to respond before Brown could accomplish his goal.

In December 1859, he was hanged in Charles Town for his attack. Historians agree that this was the spark that began the Civil War. Before John Brown’s famous raid, negotiations between the differing North-South factions might have been possible. However, after the attack – and Brown’s trial and hanging – emotions ran so high that armed conflict became an inevitable outcome.