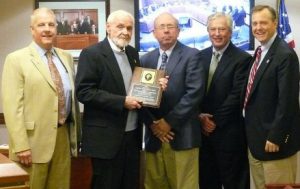 The commissioners received the nomination for Mr. Lynn from the Washington County Historical Advisory Committee. Ralph Young is the chairman of the committee.

The 2009 John Frye Historic Preservation Award was presented to “Captain” South Lynn in recognition of his efforts to promote historic preservation in Washington County. “Captain” Lynn is the owner and restorer of the historic Kennedy Farm. He carefully restored and maintained the Kennedy Farmhouse for over thirty-five years.

To gain the extremely rare National Landmark designation, South Lynn went through arduous efforts to demonstrate that this was the house that was used by John Brown for planning and staging the infamous Raid on Harpers Ferry in 1859. The John Brown Raid is known as the spark which started the Civil War. The Kennedy Farm was the headquarters for Brown and his men, for several months prior to the October 1859 historic event.

The house is a completely restored two-story log farmhouse, furnished as it was in 1859. For several months it served as the residence for John Brown and his army of 21 abolitionists who ate, slept, and armed themselves for the Raid on Harper’s Ferry. In 2009, the country commemorated the 150th Anniversary of John Brown’s Raid, and the more than 100 events that took place during the anniversary observances received a Top 100 Event in North America Award by the American Bus Association.

“150 years ago this past October, John Brown staged his raid on the federal armory at Harpers Ferry, and historians point to that action as being a singular event which eventually led to the end of slavery in the United States,” said Hagerstown-Washington County Convention and Visitors Bureau President and CEO Tom Riford.

“Captain” South Lynn is a veteran of the US Navy and served in World War II. He is a member of the Sons of Confederate Veterans, the Maryland Order of the Cincinnati, the American Legion, the Ark, and the Dove Society, the Masonic Order, and several historical and preservation associations.

According to Ralph Young, “If not for South Lynn, the John Brown Farm in Washington County would have long ago been lost to history. South Lynn has tirelessly cared for an important part of our nation’s history and has spent a remarkable lifetime of service on behalf of the citizens of Washington County and the United State of America.”

Ralph Young and Tom Riford presented to the Washington County Board of County Commissioners the official nomination for the award, and the commissioners unanimously presented the county’s highest preservation award to “Captain” South Lynn.

John Brown’s Raid on Harpers Ferry is one of the most important historical events in our nation’s history. “Before the raid, negotiations and a compromise between North and South might have been possible; however, after the attack—and Brown’s trial and hanging—emotions ran so high that armed conflict became inevitable,” said Riford. “The story of John Brown cannot be told, without the historical context of the carefully restored Kennedy Farm.”

The Kennedy Farm is a member of the Hagerstown-Washington County Convention and Visitors Bureau.

In 2009, the Maryland Governor’s Cultural Heritage Tourism Award was presented to the Hagerstown-Washington County Convention and Visitors Bureau. The presentation took place at the Maryland Tourism and Travel Summit where Governor Martin O’Malley spoke about the importance of the hospitality industry to the state’s economy. The governor’s award was presented in recognition for the work in promoting the 150th anniversary of John Brown’s Raid on Harpers Ferry. Governor O’Malley pointed out that the first shots that sparked the Civil War happened in Washington County, Maryland. He praised the cooperative multi-state efforts to bring attention to the 150th anniversary of John Brown’s raid.

For more information, see www.marylandmemories.com. Washington County is home to 5 national parks, 8 state parks, over 30 museums, and is ranked first in the State of Maryland in Retail Opportunities.