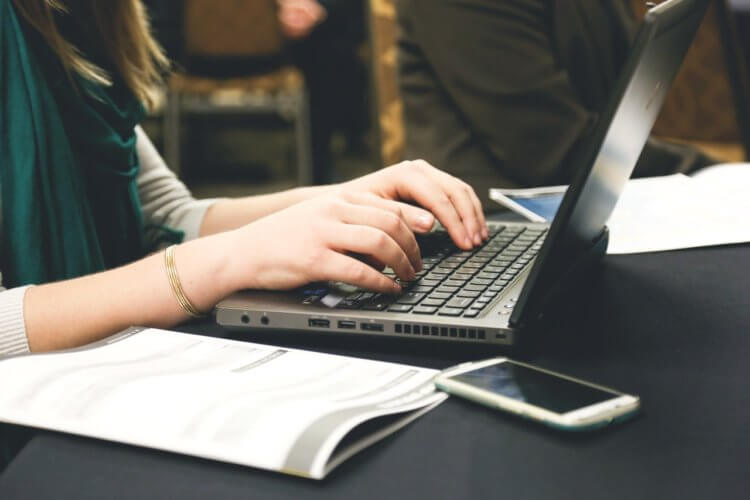 For those yet unfamiliar with the in’s and out’s of moot court oral argument, the following should serve as a guide. For further guidance, consult a member of the Moot Court Board and/or view a video recording of past Hardt Cup or Dean’s Cup finals.

If you think of (and/or organize) your oral argument in outline form, the two or three reasons contained within your roadmap should be the highest levels of your outline (below the conclusion you want the Court to reach). The body of your argument should expand below the reasons you list in your roadmap. The roadmap gives judges an overarching picture of the more nuanced argument that will follow.

For better or worse, law has become a text-based discipline. There are authoritative legal texts — constitutions, statutes, case judgments and so on — that set down legal rules. Consequently, one of the most common forms of legal argument is to identify the case-relevant legal texts and then use them to figure out the relevant rule. This is the first type of legal in Huhn’s framework and perhaps the starting point for most legal arguments.

Here’s a real example. Suppose you punch someone in the face on a night out and they accuse you of assault. You get arrested and you hire a lawyer. You ask them whether you are likely to be found guilty or not. The first thing this lawyer is going to do is to look up the rule governing assault cases like this. In Ireland, this rule is to be found in Section 2 of the Non-Fatal Offences Against the Person Act 1997:

Assault Rule: A person shall be guilty of the offence of assault who, without lawful excuse, intentionally or recklessly: (a) directly or indirectly applies force to or causes an impact on the body of another, or (b) causes another to believe on reasonable grounds that he or she is likely immediately to be subjected to any such force or impact, (c) without the consent of the other. [Text modified slightly from the statute to make the consent condition of the offence a little clearer]

The lawyer will then plug this rule into an argument about your case. Depending on the facts, they may say that you are likely to be found guilty or that you acted with lawful excuse (say, self defence) and so are likely to get off.

But it’s not that straightforward. Text-based legal rules rarely are. The terms within the text need to be interpreted. Their true meaning, within the context of the case at hand, needs to be determined. Sometimes the meaning might be obvious or uncontroversial, but many times it is not. The Irish assault rule, for example, contains a number of vague or uncertain terms. What does it mean to apply force ‘directly or indirectly’? Punching someone in the face is direct force, surely, but what if you throw water in their eyes? Is that indirect force? Come to think of it, what is ‘force’ anyway?

Fortunately, the Irish statute answers some of these questions for us. Later on in Section 2 of the 1997 Act it tells us that force includes “(a) the application of heat, light, electric current, noise or any other form of energy, and (b) application of matter in solid liquid or gaseous form”. So that clears up some confusion. But other doubts remain. What does it mean to ‘recklessly’ apply force? What would a ‘lawful excuse’ be? There are answers to these questions though they are not always clear and it would require significant additional argumentation to confirm the true meaning of the rule in this case.

I won’t belabour the point. As Huhn points out in his discussion, all text-based arguments have to be supported by some kind of textual analysis, i.e. a premise that supports a particular interpretation of the rule. This means that text-based arguments tend to take the following general form:

Canons of Construction: There is some specific rule of legal interpretation that can clarify the meaning of the rule. There are lots of these so-called ‘canons’ of construction. Examples include expressio unius est exclusio alterius (if you expressly mention one thing you exclude another) or ejusdem generis (when items on a non-exhaustive list are of a particular type then all other members of that list are assumed to be of the same type). You could dedicate years to studying all the different canons of construction and not wrap your head around them.

Intratextual analysis: A later part of the same text clarifies what the true meaning of the rule is. So, to repeat the previous example, a later subsection of the Non-Fatal Offences Against the Person Act 1997 clarifies what is meant by the term ‘force’. Sometimes intratextual analysis is more subtle than this, however. Sometimes it is a case of trying to make an entire legal text coherent and non-contradictory by implying a fuller meaning into an earlier part of the text.

One of the great virtues of Huhn’s framework is his attempt to exhaustively catalogue not only the five main forms of legal argument but also the different ways in which to support or attack those arguments. We’ll see this as we discuss the four remaining types of legal argument. 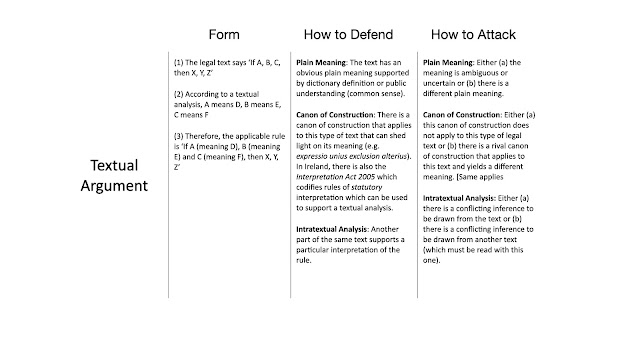 The next type of argument is the intent or purpose-based argument. This is a sub-species of textual argument where, instead of looking at the plain meaning or objective meaning of a legal rule, you focus on the intent or purpose behind the rule. This type of argument is commonly used in contractual interpretation where the court figures out the meaning of a contractual term by appealing back to the intentions of the people who wrote it. It is also used in statutory and constitutional interpretation when lawyers focus on the intent of the legislature when drafting a law or the intent of the ‘framers’ when drafting a constitutional text.

Here’s an example of an intent-based argument. There’s a famous US case called In Re Soper’s Estate. It was decided in Minnesota back in the 1930s. The facts are somewhat unusual. It involved a man called Ira Soper who was married to a woman called Adeline Westphal. They lived in Kentucky. Soper must have been unhappy because he faked his own suicide and ran off to Minnesota. While there, he assumed a new identity (John Young) and married another woman called Gertrude Whitby. Technically, since Soper/Young was not dead, his original marriage to Adeline was still valid. Furthermore, since it was an offence to be married to two women at the same time, this meant that Gertrude was not, technically speaking, his legal wife. This technicality becomes important to the case.

Young entered into business with another man called Ferdinand Karstens. To protect their interests in the business they signed up to an insurance contract (or rather assurance contract) that ensured lump sum payments to their spouses or next of kin in the event of one of their deaths and ensured that the business would be transferred to the other partner at the same time. Since the terms of this deal could apply to either partner and either of their spouses, it was worded in an abstract way. As follows (this is slightly modified from the original):

Soper/Young really did die and his second wife Gertrude collected the insurance money. But then his original wife found out that he had faked his earlier ‘death’ and came along claiming that since she was still his wife she should receive the insurance money. The court had to figure out what the phrase ‘wife of the deceased partner’ meant in this context.

The majority judgment in the case decided that the phrase was ambiguous given the circumstances of the case. You had to look beyond the plain meaning of the text to the intentions of Soper/Young when signing the agreement to figure out what it really meant. If you did that, they argued that the meaning was clear: Gertrude (the second ‘wife’) was the intended beneficiary not Adeline. This verdict was disputed by a minority judgment which argued that it flew in the face of the plain meaning of the text. There is some logic to the minority judgment, but it is a complicated linguistic issue. Either way, the majority verdict is still a good example of an intent-based argument being used to justify a particular legal rule — in this case a contractual rule — being applied to a case.

Look at changes to the text over time: A history of amendments or revisions to a text might reveal the intent insofar as these amendments suggest a refinement of the text to better approximate the intentions of its drafters.

Look at the history behind the text: The text will have been produced in a certain historical context perhaps in response to a particular challenge or controversy. This might suggest a particular intent. For example, the meaning of the US Constitution is sometimes interpreted in light of the historical purpose of the War of Independence and the separation from the United Kingdom.

Whenever you move beyond the strict wording of a legal text you are entering troubled waters. There is a view out there that lawyers and judges should concern themselves solely with the strict literal wording of the text. They should not add words that are not there or distort the literal meaning with their own preferences or ideas. Furthermore, the idea that some legal texts have intentions or purposes behind them is problematic since they are often drafted by groups of people that may lack a common intention or they may have been intended to provide timeless abstract principles for a society (this is a common argument made about constitutional texts – If you’re interested I have written a couple of papers about some of the philosophical problems with constitutional interpretation).